Restoring the Dream for America’s Youth 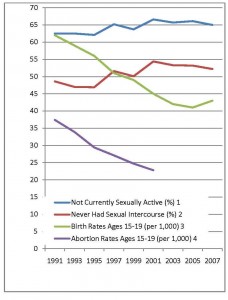 What the Data Shows

A large majority (2/3) of high school students in the U.S. are not currently sexually active and most students (52%) have never had sexual intercourse.  As the number of teens choosing abstinence has been steadily climbing for nearly two decades, teen birth rates have fallen over this same period of time.  While the past two years have seen slight increases in teen births (+3% in 2006, +1% in 2007) the overall teen birth rate is down sharply (34%) since 1991.

Abstinence is the safest, healthiest choice for teens.  Abstinence education programs support teens’ desires to avoid the risks associated with sexual activity, and to equip teens with skills to avoid pressure toward sexual activity.  As indicated above, abstinence is not only realistic, but for most teens it is the reality.